Introduction to Honeymoon challenge for July

The most logical prompt following Weddings is the Honeymoon. That period of blissful vacation after 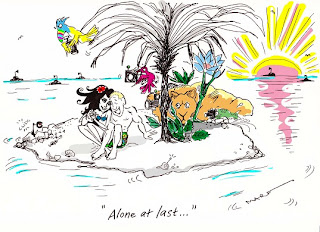 (photo source)
the nuptials have been pronounced and the reception has concluded.

According to wiki.answers.com: The term 'honeymoon' first originated in Babylon, about 4,000 years ago. Honeymoon came into use for the month after a wedding, when the bride's father would give the groom all the mead he wanted. Mead is actually a honey beer, and being so, the Babylonian calendar was a lunar calendar, (based on the moon's cycle). They then started to call that month, the 'honey month', which we now have adapted to be 'honeymoon.'

Another article by Hudson Valley Weddings reports two alternatives for the honeymoon custom that are nearly as ancient. The article states that "Today's "happy ending" to the wedding event is a far cry from its much different beginnings. The word honeymoon has its roots in the Norse word "hjunottsmanathr" which was anything but blissful." It describes the ritual where the bride-groom steals his bride-to-be and hides her from her family, with the help of his friends and family.

The Scandinavian word for 'honeymoon', according to the same article, "is derived, in part, from an ancient Northern European custom in which newlyweds, for the first month of their married life, drank a daily cup of honeyed wine called mead. The ancient practices of kidnapping the bride and drinking the honeyed wine dates back to the history of Atilla, king of the Asiatic Huns from A.D. 433 to A.D. 453."

For a modern definition and application of the concept of honeymoon, I consulted Wikipedia. "A honeymoon is the traditional holiday taken by newlyweds to celebrate their marriage in intimacy and seclusion." Today, honeymoons by Westerners are celebrated somewhere exotic or otherwise considered romantic...Originally "honeymoon" simply described the period just after the wedding when things are at their sweetest; it is assumed to wane in a month. This is the period when newly wed couples take a break to share some private and intimate moments that help establish love in the relationship. This privacy in turn is believed to ease the comfort zone towards the physical relationship, which is one of the primary means of bonding during the initial days of marriage. The earliest term for this in English was 'hony moone', which was recorded as early as 1546."

Other sources for the origins and meanings of honeymoon.
The Wise Geek
The Beall Mansion

All searches seem to agree that the word "honeymoon" involves the month long drinking of mead by either the bridegroom or both the newlyweds, and some amount of "hiding" is involved either before or after the nuptials.

Last month we had the Wedding; for July we'd like to focus on The Honeymoon. 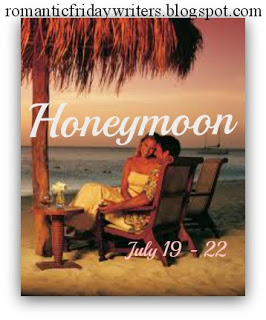 Only for this challenge, RFW recognizes that not all honeymoon periods involve a wedding. The honeymoon could refer to that period after taking a platonic relationship to its next logical step; the phase in the DV cycle where the abuser is wooing back into the victim's good graces; that period of adjustment when blended families attempt to get along; the getting to know you phase after a promotion (who's the cutie in the next cubbie keeps making the "come here" eyes?); a relocation to a new city (who's the hottie lounging by the pool or mowing the lawn every other week?)

For writers of more contemporary or darker commitments: that period of blissful adjustment after being bitten by a shifter or vamp, feeling the relief after a bad break-up, the thrill of quitting a go-nowhere job.

Whatever the circumstances of the Honeymoon ritual, be sure to add some romance to the exuberant feeling of "the right decision"; even if the feeling is only a few moments, a few hours, or a few months. Honeymoons are essentially a celebration of a long anticipated decision come to fruition.

Any genre or POV, prose or poetry, fiction or non-fiction, up to 1000 words. The linky will be open from July 19 thru July 22.  Be sure to link your DIRECT POST, and add the undertone of romance to whatever Honeymoon situation you create. Have fun!

Email ThisBlogThis!Share to TwitterShare to FacebookShare to Pinterest
Labels: Honeymoon