STUCK IN THE MIDDLE WRAP-UP 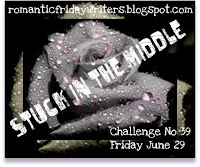 This weeks submissions for Challenge #39 STUCK IN THE MIDDLE were awesome!!

I was a bit worried that we would have no poets this challenge, because Our criteria was slightly different in that it involved an observer to the love affair, not the couple themselves.  We should not have doubted the creative skills of our poets though:

Sally's emotionally sensitive poem stirred my social worker heart.  So often I see this scenario in my day job.  The sentiment, the adultified child, the family angst; all captured the Stuck in the Middle theme perfectly.

Genskie is new to RFW, and her first submission was a poem of forgiveness for a father that already had a family he was stepping out on.  A poignant, evocative poem of cheating, ethics, and choices.

Adura's poetry gave a different twist to the theme with a wife/mom stuck in between her husband and his son.  The conflict was sympathetic, the emotive plot heart wrenching, and the character personalities vividly realistic.

Several of our contributors chose to submit fitting/or reworked excerpts from their published novels:

Ruth's (from a novel she is currently polishing for publication) interpretation of the theme included engaging characters and a scene plot with the stuck in the middle character as a middle-man/go between type.  And, he's a ghost, closely tied to both the lovers.  Although his realm of influence is limited, his powers of observation are clear.

Roland posted an excerpt from his latest publication New Orleans Arabesque.  Victor sacrifices himself for the love of Capt Sam and Sam's reunited wife Meilori.  Poor Sam and Alice are stuck in the middle as Meilori disapproves of Sam's son Victor, and Alice would as soon send Meilori back to the darkness that her sister captured her in for years.

Francine posted an excerpt from her novel Love Walked In, and is from the perspective of a 14 year old boy internalizing the virtues of a potential new step dad.  The poor kid had a lot of people's opinions to mull over, not to mention his own conflicted thoughts of what would make his mother truly happy, despite the discomfort of the rest of the family.

And of course lets not forget our contributors that reviewed the criteria (and I'll specifically NOT mention those that were over word count or posted a love triangle in any category), and created a special writing for this particular challenge:

Crystal's characters were engaging, well developed within the flash fiction and theme criteria, and displayed a unique take on the stuck in the middle theme as the prospective character is offered a viable love alternative for her "silence" after the crime family linked boyfriend has left her.  Lots of intrigue for a continuing story.

Linda (Scheherazhad) entry included a physical stuck in the middle concept as her characters embark on a surprise road trip to visit the MC absent boyfriend.  To sweeten the concept Linda placed her character as witness to her best friends cheating on their respective relationships, forcing our character to literally sit between the two to limit contact.  Hubba-hubba.

Heather's submission was told from two POVs; that of the little brother looking forward to the return of his older sister - which in turn means she will bring home her boyfriend who has become a "big brother" to our perspective character.  And also includes the internal conflicts of the Sister, as she wonders how to break the news to her family that she has broken up with someone all considered a family member.

Celeste (Weissdorn) also used the physical/emotional stuck in the middle concept with the perspective character sitting at a couples dinner, literally sitting between her best friend's new lover, and the ex.  And of course the new love is perfect, handsome, and definitely not the old love, which our perspective character remains loyal to through out the story.

Denise's excerpt was a continuation from last challenge, and showed our obsessed lover in the midst of a love triangle; desperately trying to recapture the lost love by a look-alike replacement.  And then, the ex returns . .

Donna used the perspective of a step-daughter running from her mother's house, and an argument over the ex with the new hubby; and ending up stuck in the middle of a similar argument between the step-dad and his  new love.

Rekha's excerpt explored the cultural repercussions of a break up, and the testing of loyalty according to gender and social standing.  A short but intriguing mystical look into a unique setting and circumstance.

Anna used a love triangle with a twist of having the past love unexpectedly and inconveniently appear at the moment when our lover finally gives up and moves on to a new life, and a new love.

You may have noticed I did not mention Joy (JL Campbell) as yet, and that is because I wasn't sure if her excerpt was a new writing for RFW, or if it was a sneak peak from one of her novels.  The characters were so well built, with intrigues, a past, and a present so intricately combined that I felt these characteers and their situation had to be a part of a larger work.  Our perspective character is stuck in the middle of several conflicts; his divorce proceedings from the ex, a new lover his mother doesn't approve of (mom loves the ex), and the lingering effects of the separation of his own parents on his social and  moral boundaries.

So that's a wrap for this challenge.

Our next challenge Greener Pastures on Friday, July 13, is also another complicated set up with some special rules to assist in judging the Featured Writer and Runner Up awards.  We'll post the specific judging criteria Denise and I expect to use for the FW/RU awards when we post the official announcement, but for now, you have two weeks to write, polish, and schedule your Greener Pastures excerpts using the following criteria: 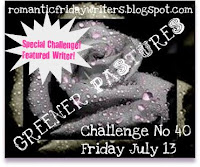 This prompt is about long-term love; perhaps suffering a mid-life or 7 year itch crisis. The couple recognizes it is time for a change; but how drastic does the change need to be to rekindle the relationship? Who wants the change; husband, wife, mutual? Who would suffer the most from either a break up, or from the status quo?

For older lovers: perhaps this is the retirement of one or both, or one is suffering a physical or mental health change.

For mid-life lovers: perhaps this could be an empty nest syndrome, or a male mid-life crisis, or female menopause.

For younger lovers: perhaps there is an unexpected pregnancy to upset the balance; or a career change –promotion or firing or company move; or the sheer boredom of routine.

What we want to see is when the romance loses it shine, and the eye wanders, but what our disgruntled lover finds so appealing in another is the qualities that the old flame has lost. Does he/she realize this on their own? Or does the jilted lover or new love point it out? How is the situation resolved? Or is it too late?

This is a special challenge, so it has special guidelines:

To be in the judging for Featured Writer, you must be a member (sign up on the thumbnail linky) and follow these guidelines:

Email ThisBlogThis!Share to TwitterShare to FacebookShare to Pinterest
Labels: Greener Pastures, Stuck in the Middle wrap up